The Diocese of Vijayapuram was erected by the bull ‘Ad Christi Nomen’ issued by Pope Pius XI of happy memory on July 24, 1930. Rt. Rev. Dr. Bonaventura Arana OCD was its first Bishop. Rt.Rev.Dr.AmbroseAbasolo OCD, his successor, built the Cathedral at Vimalagiri, in honour of the Immaculate Heart of Mary and dedicated the whole diocese-the priests, religious, and the people to her Immaculate Heart.

The diocese was financially, socially, and spiritually backward. Both Bishops Bonaventura Arana and Ambrose Abasolo worked for the spiritual and temporal uplift of the poor of the diocese. His Excellency Rt. Rev. Dr. Cornelius Elanjickal seriously considered about the need for a diocesan congregation of sisters who would be better committed and available to serve the diocese and its poor people.

There already existed a society of sisters by name ‘Daughters of St. Joseph’ in the diocese, having its mother house in the parish of Fathimagiri at Kunnamthanam. The society was found by an ex CMI priest, Rev. Fr. VigiliusChiriankandath, who later joined the diocese during the time of bishop Ambrose Abasolo OCD. This society was renamed under the state of observation and had no formal approval of the Local Ordinary. This society was registered in the year 1979, during the time of bishop Cornelius Elanjickal (No. A. 387). Bishop Thuruthikonam, having in mind about founding a diocesan congregation, accepted 34 of its members and founded the new congregation under the title of ‘Daughters of the Immaculate Heart’ (DIH) 1993 June 29. The society of Daughters of St. Joseph was suppressed with the consent of Rev. Fr. Vigilius Chiriankandath. The main intention of Bishop Thuruthikonam in starting the diocesan congregation was to spread the devotion to the Immaculate Heart and to serve the poor people of the diocese for their all-round progress. 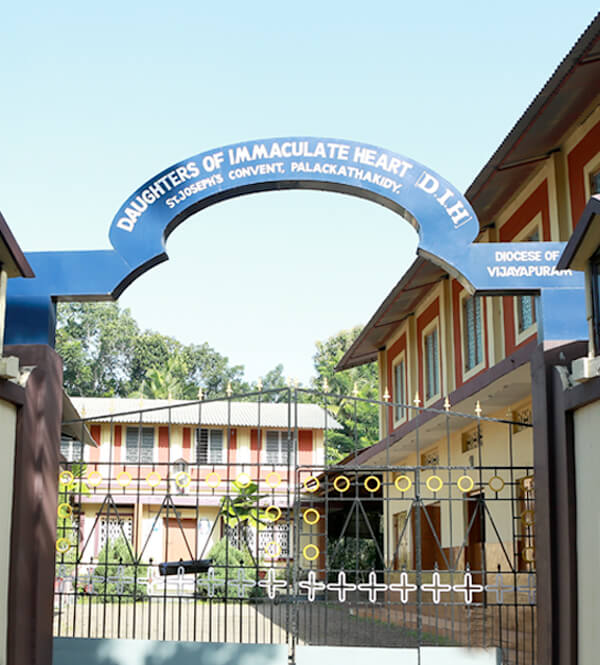 We accomplish our mission by the help of Immaculate Heart of Mary through pastoral activities, social services, family apostolate, education and care of the sick and the poor.

The Daughters of the Immaculate Heart follow the Heavenly Mother to bring the Saviour to the needy of the Diocese and they “SERVE GOD IN THE POOR”.

“Do whatever he tells you”As Mary becomes the mediator to the needy, each sister should understand the needs of the poor and become mediators before the father.