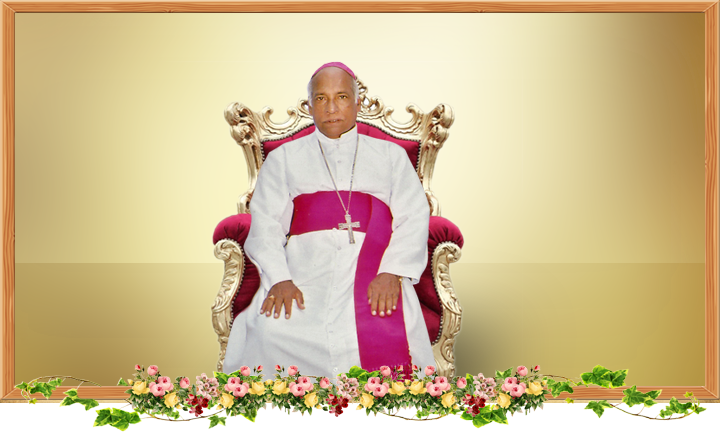 Bishop Peter Thuruthikonam (Bishop Emeritus of Vijayapuram) was born on August 1, 1929 at Vallamkulam, a substation of St. Joseph’s Church, Thiruvalla, which belongs to the Diocese of Vijayapuram. He was born as second son of beloved His parents Mr. Joseph Thuruthikonam and Mrs. Aleyamma.  At the age of 20 he joined the minor seminary of the Diocese. He was admitted to the seminary by His Excellency Rt. Rev. Dr. Boneventura Arana OCD. His Rector in the minor seminary was late Msgr. Jacob Vellaringatt.

He was ordinated  on March 12, 1959 by His Grace Archbishop Most Rev. Dr. Joseph Attipetty, the first native Archbishop of Verapoly. There after Fr. Peter renderd his service in various parishes of the diosece . After seven years he was transferred from Mount Carmel Church Thrivanchoor and appointed as the secretary to the Bishop and Chancellor of the Diocese. Besides he worked as the parish priest of St. Joseph Church, Chengalam, and St. Mary’s Church Vadavathoor.

By the grace of God he could develop the diocese following the footsteps of his predecessors. Many new Churches were built, three pastoral centers were opened, started one hospital, old age home and many other institutions for the growth of the poor people in the Diocese. For eighteen years  he was guiding the destinies of the Diocese of Vijayapuram as Bishop. He  retired in 2006 when Bishop Sebastian Thekethecheril was nominated the Bishop of Vijayapuram on May 8, 2006. Bishop Peter Thuruthikonam slept in the Lord on September 5, 2011.